Two reasons why you should use a trade mark attorney…

I was wondering what to write about this month, and then two independent unrelated moments both shouted out reasons why you really should have a trade mark attorney in place to look after your portfolio.

First, there’s the letter (below) from “Stern Young & Partners”, reminding us of the need to renew the registration of our logo (yes, I followed my own advice and registered the name and logo straightaway when I started the business!).  Needless to say, I did know the due date was approaching; the registration is safely on our records and we watch for these very carefully.  When my records staff reminded me a few weeks ago, it was a quite a feeling – is it really ten years since I started this? 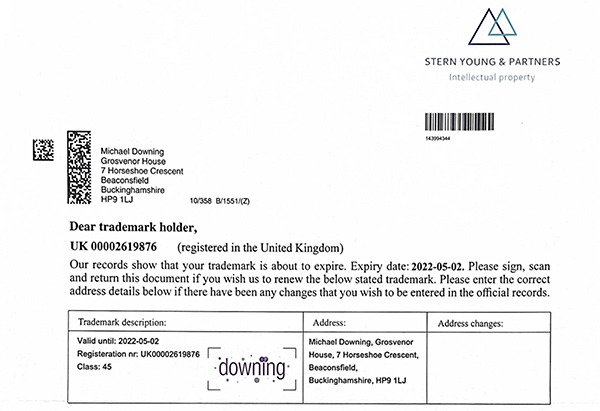 Anyway, Stern Young & Partners – they sound like a reputable and official outfit, don’t they?  Errmm… no.  A quick Google search shows that they’re regularly sending out these reminders despite not being professionally qualified and not being registered with our regulator, IPReg.  The more serious concern, though, is the price – they want £1,320 (plus taxes) to renew my registration whereas our cost to a client would be £400 (again see below).  The underlying official fee is £200, so why they think it reasonable to charge over five times my price is frankly beyond me.

Now, if you’re a client of mine, then there’s an easy way to spot these scams.  Quite simply, anything that comes from me is official, whereas anyone who deliberately bypasses me and goes to you direct is suspect.  If something does need attention, I’ll get in touch and explain what needs doing, why, how, and what it will cost.  If someone doesn’t want you to have the benefit of my explanation and background, well that speaks for itself.

You might also wonder why you should entrust the renewal of an important business asset to someone who can’t work out that a scam like this probably isn’t going to fool a practising trade mark attorney or the Chartered Institute of Trade Mark Attorneys… but I couldn’t possibly comment on the degree of intelligence and care that this displays.

The second is a somewhat sadder story.  We were contacted out of the blue by a business who needed help dealing with some correspondence from the Trade Marks Registry.  Their business involves a lot of temporary staff in a busy, noisy workspace, and their work has a strong seasonal element. As a customer-facing business they had been especially busy making up for lost revenue from lower footfall during lock-downs. Their mark was registered, but a third party applied to revoke it.  The Registry posted a letter to them to notify them of this and set a deadline for filing a defence some two months later.  They do not recall receiving the letter and had perhaps put it to one side to deal with later – inevitably, it was lost or forgotten about and no defence was filed.

The Registry therefore revoked the registration, and sent them a Decision along with a letter alerting them to the deadline for Appeal. This did reach someone in the business who, having not seen the initial cancellation letter was very confused about their registered trade mark being cancelled without their knowledge. They asked to appeal the decision, but having no copy of the initial letter about the revocation had no clue where they should start or on what grounds the third party had applied to revoke the mark. The letter with the deadline for Appeal arrived shortly before Christmas, when they were rushed off their feet.  They contacted us a few days after the Appeal deadline expired.

If they had appointed us as their trade mark attorney from the start, the letter would have come to us.  We would have logged the deadline and reported it to them with advice as to what was needed.  We would have reminded them in increasingly urgent tones as the deadline approached, and would have made sure a defence was filed. Then, we would now be asking the other side for evidence to support their assertions, instead of begging the Registry to allow us ask the appeal tribunal to overturn a valid decision and remit the case.

So yes – we do strongly recommend having a trade mark attorney in place to represent you, even if you’re not expecting to need help.  And of course if you need any help, I'm here and ready to listen.