Did you know that 40% of all internet-powered searches in the UK and US are now driven by a voice command?

That means a search via one of the speech-interface devices, whether that’s a mobile phone (“Hey Google” or “Hey Siri”) or through one of the many voice controlled in-home devices such as Amazon Echo, Google Home etc. The data is accurate as at March 2020; since the pandemic began it’s likely that voice search volume has risen even further thanks to the increased time we all now spend working from home, or on furlough, or just plain unemployed.

It’s not that surprising when you think about it. Around a quarter of the UK population have at least one smart-speaker in their home, and it’s on course to reach over half of all homes in the UK by the close of 2022. As a result, sales on eCommerce sites, driven by voice, are valued at approximately $3 billion per annum in the UK and $31 billion in the USA. 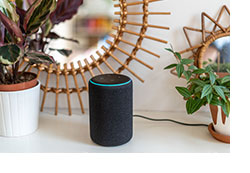 As the Internet has become steadily more important over the decades I’ve been doing this job, I’ve seen conceptual and visual similarity become steadily more important – arguments such as whether two web addresses look similar are obviously relevant, but conceptual similarity plays to people’s imperfect recollection and what they type into a search bar to find that website they saw last week that had the thing they wanted…

The fact that people are returning to ordering things via a voice command means we should probably start to put more emphasis on the question of audible similarity. Devices such as Alexa use ‘Natural Language Programming’, which converts speech into words, sounds and ideas.  The query goes to Amazon’s servers and breaks down your words into a series of sounds.  It then uses a database of pronunciations to determine if the combination of sounds correspond to them.  It identifies these combinations into areas of importance – i.e. are they a request for an action, or maybe a brand reference? That process could provide an independent source of evidence as to similarity, since if Alexa et al are likely to confuse the two trade marks, that’s going to be good evidence of similarity.

Which may finally give me a reason to get one of these devices myself. Aside (of course) from the fact that I need to order some candles – specifically, a set of four?