Well hello again, time to gather my thoughts and look back at the last month in IP. There’s only one story I could possibly look at, which is the epic battle that has gripped UK social media for weeks… that of Colin and Cuthbert.

For my overseas readers, and any UK readers that have been taking lockdown so seriously that they have been literally hiding under a rock for the last month, then this is all about “Colin The Caterpillar”, a cake in the shape of a caterpillar sold by the up-market food, clothing and homewares retailer Marks & Spencer. The remarkably similar “Cuthbert the Caterpillar” cake is sold by Aldi, who I would not wish to offend so will simply note that most people would not place them in the same “up-market” category. I haven’t checked the prices personally, as both Colin and Cuthbert seem to have sold out overnight, but I imagine that you get quite a few more Cuthberts to the pound than Colins.

M&S allege that the similarity leads customers to believe that the cakes are of the same standard, and that Aldi is leveraging the M&S brand. Just to complicate things, there are a range of other similarly-themed cakes available to satisfy those with a sweet tooth and an inexplicable desire to feast upon infant Lepidoptera - including Cecil, Wiggles, Curly, Morris and Clyde from Waitrose, Sainsburys, Tesco, Morrison and Asda (respectively). Clearly, no supermarket dare be caught without a larva cake on its shelves.

The basis for M&S claim seems to be quite straightforward – they own two relevant trade mark registrations, one for ‘COLIN THE CATERPILLAR’ and one for an image of the packaging – which includes the words, part of the cake itself, and various other artwork.

Personally, I would have thought that ‘Cuthbert’ was quite an unusual name with quite different connotations to British ears – interestingly it is Aldi that have the somewhat upper-class name and not M&S. So an infringement claim based on the word mark may be an uphill task. However, Aldi’s packaging does seem to be more similar to M&S’s registration than Cecil’s, Wiggles’, Curly’s, Morris’ or Clyde’s. Perhaps that explains why Cecil, Curly and Clyde are not also in the dock.

M&S chose to announce its action on social media, for some reason. On the one hand, this seems to have been quite clever, as demand for sweet sponge-based proto-insects instantly soared. If M&S had any stock to sell before their announcement, this did not last long. However, Aldi launched a counter-campaign - using the moniker #FreeCuthbert, it started with this:

which led to many good humoured memes and comments. 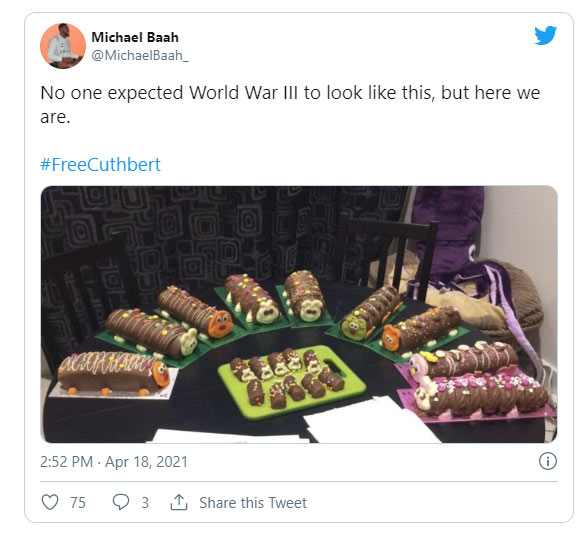 Aldi also took the step of re-introducing Cuthbert to its stores with a limited edition in support of two major charities, enabling it to campaign on social media: "Let's raise money for charity, not lawyers", which was predictably popular on social media. M&S tried to respond, saying that it loved the charity idea but would like Aldi to adopt its own character.

Inevitably, the discussion on social media is now completely detached from any informed basis in IP law. M&S probably had an interesting case in the IP Courts but the ‘Court of Public Opinion‘ operates on its own rules and the subtleties of IP law don’t get much of a hearing.

“Marks & Sparks” (as they are affectionately known) are renowned for their catchphrase “This is not just food... this is M&S food”, reflecting their view that the stuff they sell is a cut above everyone else’s. And indeed, this is not just any legal dispute, this is an M&S legal dispute…